Since the Boston Marathon, I have been receiving a steady stream of emails. Included in these were emails from runners that found photos of others using forged bibs when they logged into marathofoto.com to review their pictures.

I posted an article on Monday regarding bib forgeries that originally included a short story on the runner pictured below. He came to my attention through a couple of tips when runners noticed him in an article on Patriots.com. That article has since been removed. 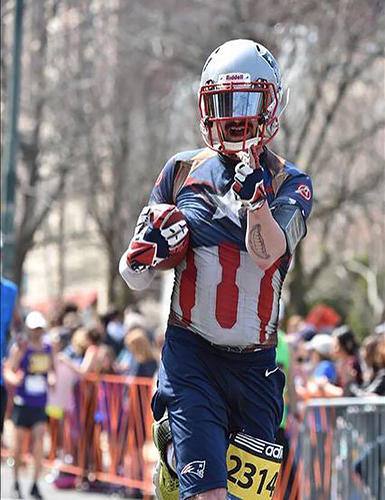 The bib he was wearing was assigned to a different runner. He is not in the 2016 results. The bib was a fake.

The full bib # is 23145. He is the only runner showing in photos with that bib #. The real runner was registered, but did not run the race. There are 16 photos of  ‘Patriots Guy’, all of them within the last mile of the race.

He is adamant that he ran the entire race in the helmet. He boasted of completing 6 Boston Marathons on his public Instagram account. He unabashedly admits that he has started in the final wave each of the past 6 years and has run as a bandit. The tradition of banditing at Boston is long, but they have cracked down after the 2013 bombings.

Boston Marathon Race Director, Dave McGillivray, wrote this piece for Runner’s World prior to the 2014 race. He gives numerous examples of why banditing is an issue. I recommend everyone that considers banditing a race read the article.

This runner was in Boston for 2013. According to the runner and corroborated by the timing of the below photo, he was receiving his medal when the bombs went off. He is pictured carrying an American Flag, which he says he carried for the entirety of the race. 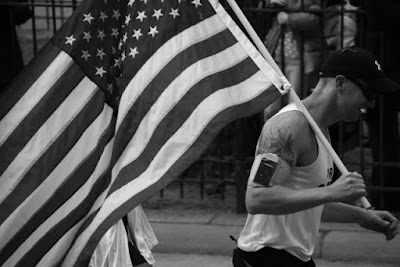 After my original post, and after the original Patriots.com article was taken down, the runner was trying to get a hold of me. He saw a Facebook post being critical of him and messaged numerous people in attempts to get in touch. (email would have worked fine)

I will not post the entire conversation. He did go so far as to offer to personally deliver the medals to me in a similar manner to what he posted on Instagram. (Since modified, and then removed) 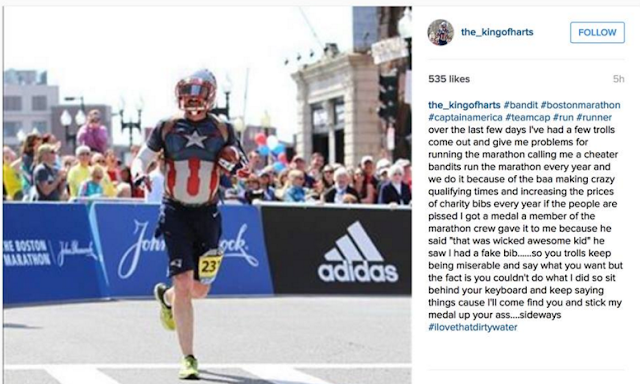 Below is the part of our conversation where he reveals the issues he has with the BAA.He also put up a picture on Instagram (since removed) with photos of 3 of the people that criticized him. At least one was a runner that was in Boston last Monday. The people that are angered are not just ‘keyboard warriors’. They are runners. They respect the race. They respect that the B.A.A. owns the race and sets the rules as they feel appropriate. 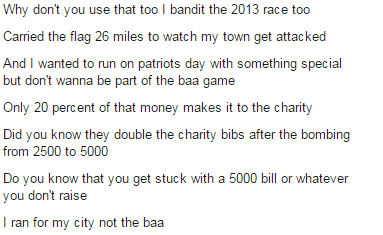 He says that he runs for his city, not the BAA. He has an issue with the charity program.

According to this morning’s Boston Herald, $16 Million was raised through the charity program in 2016. The article also estimates that the race pumps $189 Million into the Boston economy. I think the BAA does quite well for the City of Boston.

I don’t doubt that he is passionate for his city, and I would have welcomed a civil conversation regarding the policy on banditing and the issues he has with the charity program. I offered the opportunity for him to make a formal statement, and he declined. The offer still stands.