Home Uncategorized Suspicious Boston Qualifying Result for Team Lean.Strong.Fast Founder/Coach
Facebook
Twitter
Google+
Pinterest
WhatsApp
Marlon Bascombe is a New York area fitness and running coach. He is a coach/founder of team Lean.Strong.Fast. It would appear that he has a large # of clients.
While I could not find the exact # of Lean.Strong.Fast members, he posted on Instagram that 70 members of Team Lean Strong Fast ran in Sunday’s New Jersey Marathon. Additionally, he is popular on social media. 630 people follow his FB page, 12.6K follow his Instagram, and 2,175 follow him on twitter. His various social media accounts advertise that he is a USATF Endurance Coach and Newton Ambassador.
Marlon ran Boston 2016 in 4:41:35. He qualified by running a PR at the 2015 New Jersey Marathon in 3:05:37. He was flagged as part of the 2016 Boston review process.  Looking up his results, there are some immediate concerns. 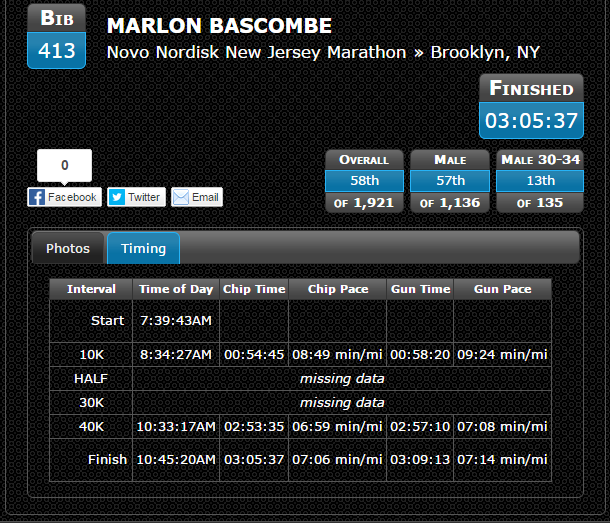 2 things stand out here. The most obvious is the missing splits. Missing splits does not necessarily indicate cheating. There could be technical issues with the timing system or an issue with the chip.

Below are the intermediate splits.

Additionally, he had a nearly 4 minute chip/gun differential. I searched through a number of other runners, and didn’t find any other differentials this large.

Marlon did respond to an email I sent him prior to posting this article. He states that he did not warm up prior to the race and started conservatively before picking up his pace from the 7 mile marker until the end.

Looking at his historical marathon results, prior to his New Jersey qualifier, I show a P.R. time of 3:41:27 at Philadelphia in 2012. His recent marathon results have all been over 4 hours. His half marathons have been in the 2 hour range. I looked a little deeper than I normally would have with the thought that he may run the races with members of his group.

Marlon did state that he has run a 5k in just under 17 minutes. I will add this detail if he is able to provide the data supporting that.

Update – Marlon sent me the below screen shot from the Nike + App. I am not that familiar with the layout of this, but it shows that he ran 3.1 miles in 16:43. The splits are confusing. If I am reading this correctly, it shows the first 2 miles were ran in a total of 13:14, which would mean the last 1.1 mile were run in 3:29, according to the data Marlon sent me. I may be reading this wrong, so if someone can email me or add a comment on how to interpret this, I can add additional information to this. 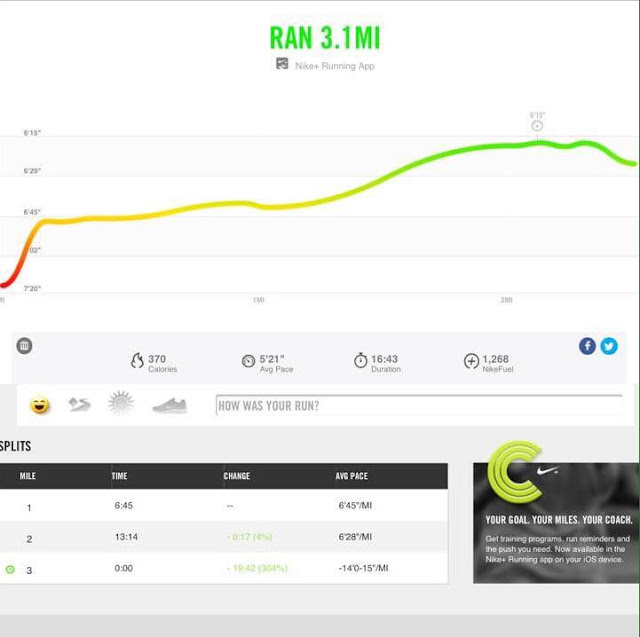 In this post, he says that his time of 3:05:37 is a PR by 2+ minutes. My thought was that perhaps he didn’t want to draw too much attention to that time since this marathon time was 36 minutes faster than his 2012 Philadelphia marathon time. Marlon explains this post through email.

“I run most races alongside people of various paces and I did run 26.2/3:08 on my own up and down the West Side Highway one weekend as a personal test, it wasn’t at a timed race but it was my best time.”

Marlon did run Boston 2014 with a charity bib and finished in 4:19:00. He does not appear in the 2013 results, but this photo is on his Instagram – it appears that he did not get to finish due to the bombings. 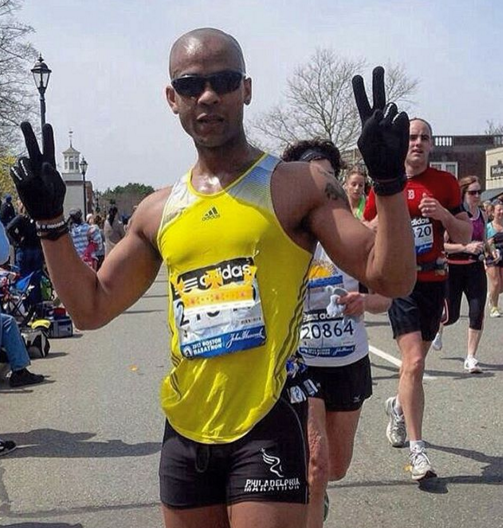 I will update this story if any additional information becomes available. In addition to reaching out to Marlon, I have reached out to the New Jersey Marathon. The 2016 marathon was just this past weekend, so I don’t anticipate an immediate response from them.

After doing a more thorough review – looking to find a race that may have been a good indicator of his marathon PR, we came across the 2015 NYCRUNS Brrr-ooklyn 1/2 Marathon. Marlon finished this in 1:45:03. This was his best recent 1/2 marathon time, in slushy conditions. 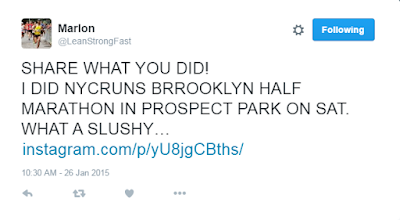 Thanks to Strava, we can analyze this run in a little more detail. The first 6.5 miles were run in 57:05. It’s at that point, that he takes a restroom break according to the note below. This run started at 8:36 AM 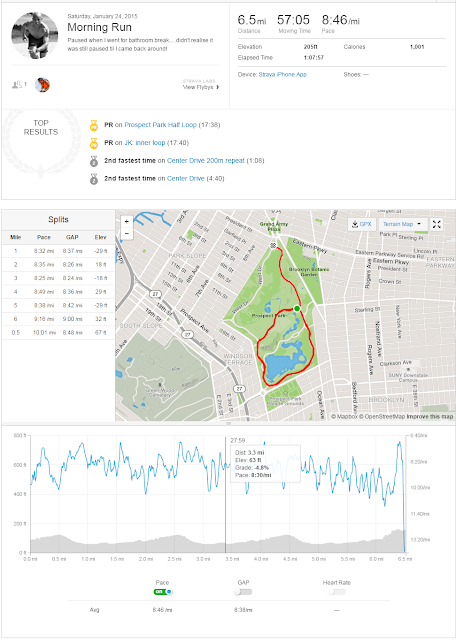 According to his note he forgot to turn it back on until the last 3 miles. According to the Strava flyby, he was idle from 9:33 to 9:45. There is no data from 9:45 until he turns it back on at 9:54.The run resumes from the exact same point that he stopped at 9:33. It would have been impossible for him to have run a loop in the 12 minutes that the tracker was off.

To summarize, we have Strava data for all but 9 minutes of his run. The last run continues past the finish line.

Let’s take Marlon at his word, and assume that he just made just  a brief stop in the restroom, and continued at 9:33 AM without his tracker turned on (Despite the flyby data showing him idle from 9:33 to 9:45).

He would have needed to have run 3.6 miles in less than 21 minutes. That would calculate be a 5:50 min/mi pace for the missing time (not allowing for the time spent in the restroom).

For a more detailed explanation of some of the evidence, see the follow up article.

Marlon Bascombe – Summary of The Data