I was mostly unaware of the subculture that exists as it relates to frequent marathoners and the quest for fame (and sponsorships). Parvaneh initially came to my attention, but as I dug through all the information, Parvaneh and the series of races she manages are linked closely with marathon legend Larry Macon. I could not tell Parvaneh’s story without telling Larry’s as well. Part 1 will focus primarily on Parvaneh, and part 2 will focus primarily on Larry.

Parvaneh Moayedi is the Race Director and owner of the “I Ran Marathons” series. The first “I Ran” race results shown on her site were run in 2012 (Although she celebrated the 5 year anniversary of “I Ran Marathons – indicating that the first races were earlier – in 2011), with a handful of races through July 2012.  The race schedule really picks up in December 2012, coinciding with the World Record time frame for Larry Macon and Parvaneh Moayedi.

Both Larry and Parvaneh claim these races as a significant percentage of their record marathon totals.

Participants without prior results

You could pick any race, and find similar results. Most of the runners will not appear in results on marathonguide or athlinks. For that matter, you will be hard-pressed to find evidence that these people even exist.

Parvaneh’s Participation in the Marathons

There were 80 “I Ran Marathons” during Parvaneh’s 1 year record. She appears in the results of all 80.

It is extremely difficult to validate or invalidate Parvaneh’s I Ran Marathon runs in a vacuum during this period of time. However, there is information that , in my opinion, casts doubt on whether Parvaneh ran all of these races that she directed.For example, during the Texas Savage Races in December 2012 – there were marathons held on 7 consecutive days. Parvaneh is in the results of all of the races. There are over 500 photos posted on the I Ran Facebook page – but none show Parvaneh on the course. This does not prove anything, but is unusual.There are, however, multiple instances where eyewitness accounts, or simple analysis, would indicate that she did not run in at least some of her events as she claims to. 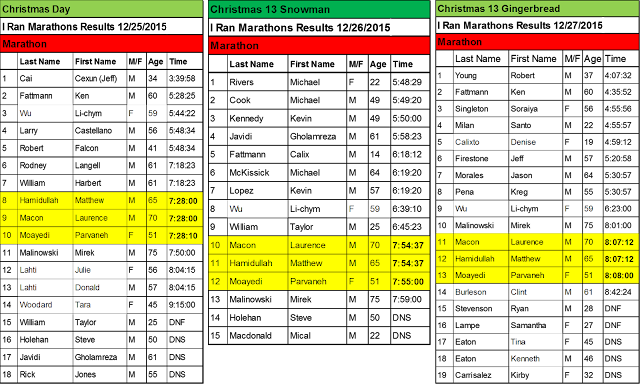 Looking at the above results, Matthew, Larry, and Parvaneh have nearly identical results each day. When I asked Ken what he witnessed these days, he stated the following:

Ken confirms that Larry walked with Matthew each day. He did get an early start, and would be out after everyone was completed. But when asked about Parvaheh…

“…I only saw her do a lap a day. Because she was always at the finish to record times and between laps to pour soda, Gatorade, etc…There’s just no way she ran marathons those days”
Additionally, Ken states that Parvaneh was not in the results initially:
“I looked up the results when she posted them a few days after the series….and Parvaneh had NOT listed herself as a finisher then…She added herself afterwards.”

Below are a couple of examples, where it would seem unlikely that Parvaneh completed the races listed on the dates that are claimed.

Above, she claims to have done a double marathon on June 14th. Then she completed a 100 mile run at her marathon pace, followed up by a marathon the very next day.

Here she claims that she ran simultaneous marathons on two consecutive days. On Friday, August 16th, in both San Antonio TX and Huntington Beach, CA. Followed by a double in California on 8/17, and a single marathon in Anaheim, CA on Sunday 8/18.
Throughout September and October 2013, she lists similar CA/TX doubles in her results.

All of the above California races except for the 10/4 race in San Francisco are part of Charlie Alewine Racing.

DISQUALIFICATIONS AND ALLEGATIONS AT OTHER RACES

Looking at the above chart, between mile 60 and mile 80, she would have passed 76 runners. After being near the back of the pack, she would have run as fast as all but 12 other runners for that stretch.

Parvaneh would have used this invalidated result, as well as the result from her own 100 mile race in order to qualify for Badwater 2014.

Parvaneh was not disqualified from Badwater, but there have been multiple runners and crew members that reported wrongdoing. One runner actually witnessed her get in the crew van and drive ahead. See below from a statement from another runner taken from letsrun.com (the source of the statement has been verified).
First PM was behind me approximately 2 hour and 12 min hours at the turnaround at Darwin (91 mile mark). At this point, I was 1 hour ahead of PM based on my later starting time and 1:12 physically in front of her. Again, 2 hours and 12 min ahead of her (2:12). I finished the race from 91 to 135 without napping, sleeping, or other off course breaks. I was on the road the entire time. AT NO TIME DID PM EVER PASS ME from mile 91 to the finish, yet she somehow finished an hour in front of me!???!! ,,,,,,, Between myself and my 3-4 crew members that were with me the ENTIRE time, we can all attest to the fact that PM 100% DID NOT PASS US AT ANY POINT IN THE RACE……especially in the back 44 miles of the course. These are FACTS. Something is definitely NOT RIGHT about this entire scene. 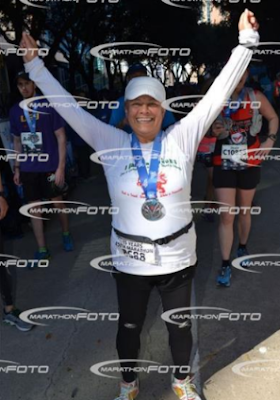 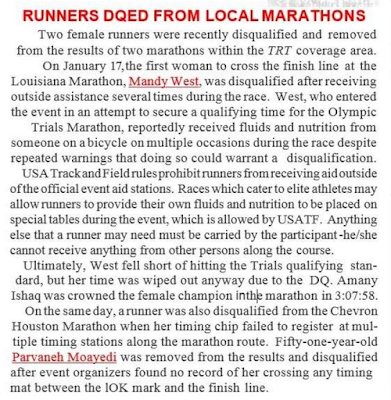 One runner posted the above article to the marathon Maniacs group, and what followed was this conversation. 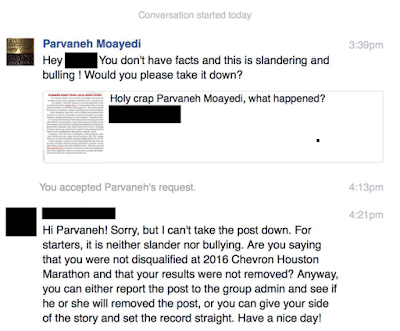 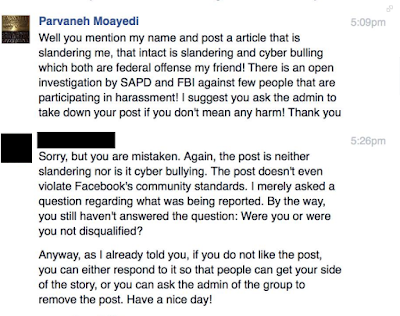 I think the above is a prime example of the types of response that anyone seems to get when they call into question Parvaneh’s results. Instead of answering the question, she tries to intimidate the poster into to remove the article. The poster of the article simply asked what happened.

Parvaneh is currently publicizing her goal to complete 1000 marathons. As many as half of the 1000 marathons in this total could be I Ran Marathon races. There are other race results that are questionable as well. 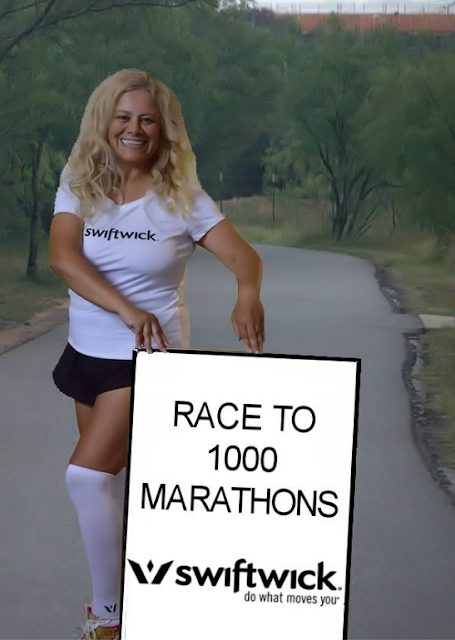 I had no idea about this subculture of marathoners. I had no idea that these small, informal marathons existed. On the surface, they seem like a great idea for people that want a no frills run. However, no matter what the intention in setting up these races was initially, in my opinion, the “I Ran Marathons” races in particular became primarily a means to obtain records. There are many questions, as laid out above, as to whether the results or even the participants are legitimate.

As shown to some extent here, and will be shown in more detail in the article on Larry Macon, there are also a number of questionable results with the Charlie Alewine races.