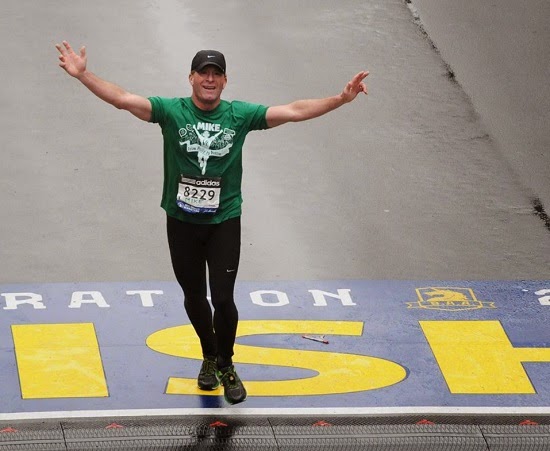 After a thorough review of the available evidence in relation to Mike Rossi’s participation in the 2014 Lehigh Valley Health Network Via Marathon, the Marathon committee concluded that while there is data from Rossi’s participation in other racing events indicating that Rossi’s time may not be accurate, there is not conclusive evidence that his time in the 2014 LVHN Via Marathon is inaccurate.  The LVHN Via Marathon has not received any reports from the more 2,500 race participants, thousands of spectators, and more than 600 volunteers, course marshals, security personnel, medical personnel or race officials on the course of any wrong doing by any runner.  Therefore the LVHN Via Marathon Committee concluded that Rossi will not be disqualified unless additional conclusive information arises in the future.
Moving forward the LVHN Via Marathon has taken several action steps to verify runner participation and provide the utmost accuracy in timing and scoring the race for all runners.  For the 2015 LVHN Via Marathon, the course will have a minimum of six timing mats – at the start, finish line and four additional on-course locations.  In addition, there will be video surveillance of the course at several locations which Via will archive annually.
The Lehigh Valley Health Network Via Marathon is proud to be a Boston Marathon Qualifying event and will continue to support this race by providing athletes the opportunity to be a part of this longstanding tradition.  The LVHN Via Marathon appreciates the running community’s support and vigilance in ensuring the integrity of our race and looks forward to continuing to provide a high quality racing experience.

If he cheated as most expect, there are only two points where he’d be at risk. The start line, and upon re-entering the course. In the crowd at the start, it would be very easy to cross the line and leave the course – no one would notice. And, it’s entirely possible that he ran the last relay leg – it would have been easy to slip right in.

Why Didn’t Lehigh Valley Disqualify Mike Rossi?
The most likely reason to me is that it wasn’t worth it to them. The Lehigh Valley Health Network Via Marathon is held to support their charity. Mike has retained an attorney. They don’t want to spend resources and time to defend a possible lawsuit. They want the problem to go away.

Here’s the thing though, Mike has no case- and I seriously doubt he’d follow through on any lawsuit. The terms of the race gives them wide latitude to disqualify runners

I agree to abide by any and all rulings of event officials, even if such ruling results in my disqualification..

I understand not wanting to deal with a lawsuit, but the waiver that Mike signed, allows for a disqualification for any reason.

Either Mike or his lawyer have been reviewing the lets run.com thread on this subject going as far as to asking for a post that was a modified quote from the movie ‘Animal House’ be removed. Letsrun complied, banned the user, and threatened to report the user to the authorities. This instance is so absurd to be comical. Below is the quote: 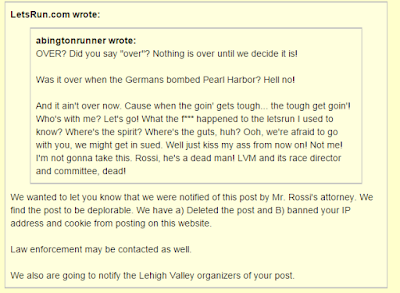 Many on the boards believe that he will file a slander suit. I do not believe this for one moment. Mike would need to prove by a preponderance of evidence that he did run this marathon. There simply has been no evidence that he actually ran. Therefore, he cannot prove even with just a 51% certainty that statements saying he cheated are not factual. In my opinion, Mike wants the world to believe he was vindicated by not being disqualified. He will not risk going into court, and having a ruling against him and have it proven in a very public manner that he did not run this marathon. In my opinion, I feel that he will be happy with the non-DQ and continue to use that as ‘evidence’ that he did not cheat.

There is another case that is very similar to Mike, except there is even stronger evidence that the runner did not run the entire course. See this article on Kara Knoblock  Moore.

To me, this case is even more egregious. Ms. Moore celebrated her result throughout social media. Despite the irrefutable evidence presented, it does not appear that she will be disqualified. Whether it is apathy on behalf of the marathon, or fear of lawsuit, this apparent decision to uphold her result is more disturbing to me than the Mike Rossi case.

The evidence is undeniable and easier to understand than the lack of photos with Rossi. For her result to be legitimate, she would have had to run the middle 13.8 miles at a pace under 6 minutes per mile. Her only half marathon was over 2 hours. And she would have had to manage to strip off her sweatshirt which was under her singlet and bib sometime during the process as well.

It will probably never happen, but I would love to see a central organization responsible for all marathon disqualifications. Take the power or responsibility away from the individual marathons. Some marathons have been very proactive and will promptly disqualify runners. Other race directors do not care even in the most obvious cases.

Mike, and Kara or those representing them – If you see this post, please feel free to contact me at  marathoncheat@gmail.com with any explanations you have. I will be happy to post any statement you may want to make or any additional information you may have.

It will probably never happen, but I would love to see a central organization responsible for all marathon disqualifications. Take the power or responsibility away from the individual marathons. Some marathons have been very proactive and will promptly disqualify runners. Other race directors do not care even in the most obvious cases.

I created this blog after a thread I made regarding Kara was pulled from the forums on letsrun.com. That thread was starting to gain traction as the Mike Rossi case was winding down.I wanted a place where we could compile data in one place and lead race officials to posts when asking them to review results. The intent is not to shame every runner with a questionable result. I try to lay out the facts, and will throw in my opinion for what it’s worth. If I ever misstate something, or get something wrong, I will quickly correct it. By semi-publically publishing these cases, my hope is that it leads to more questionable results being reported, and may serve as a deterrent for others to cheat. Also by making some disqualifications public, it may lead to other R.D’s being more confident in decisions to disqualify runners where warranted.

There have been a # of instances already where people reported results and I just forwarded the details, and they DQ’d the runners – without writing an article.