The above statement appears on Dr Pafford’s Facebook page. He is using this as a promotional tool even after the evidence detailing the questionable results being publicized.

Despite the evidence that shows, in my opinion, that Dr. Pafford  cut the course for at least 12 consecutive years, Greg remains in the results. The only evidence I see of the Legacy award is on Greg’s page itself. 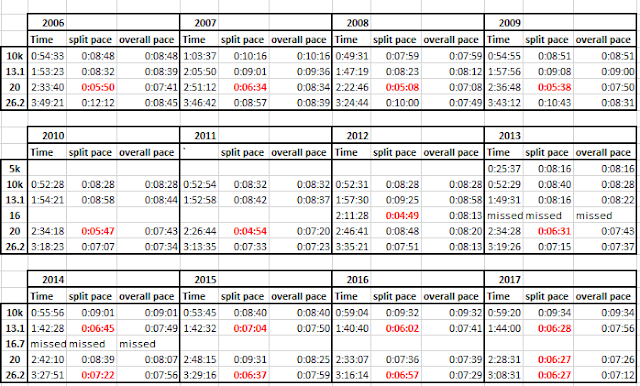 After these results were reported,

Dr. Pafford was originally disqualified from the 2017 marathon. However he was reinstated:

According to a RNR representative:

“After receiving inquiries about that runner last year, our timing company followed up and received sufficient documentation to reinstate the official time”.

It should be noted that his original time was 3:08:31, he now shows as having a time of 5:00:00. They did not reinstate his official time, they awarded him with a fabricated time.

For 2018, he dropped to the half marathon, after originally being registered for the full.

It is troubling that a race series that qualifies many runners for The Boston Marathon allows results like this to stand. It’s one thing to be ignorant or unaware of suspected cheating. But to be aware and do nothing is inexcusable. It is even worse to reinstate a runner that clearly did not run the time for which they were originally credited.

Unfortunately when an organization allows results such as Dr. Pafford’s to stand, it unfairly puts a shadow on the hundreds or thousands of runners that legitimately earned their times.

Thank you to all the readers and supporters of the site. I have not written much in the past few months. I have still been following up on tips and I am working particularly hard on the runners that I am aware of that are registered for Boston with questionable results. If you are aware of anyone that did not earn their 2018 Boston bib, please email me confidentially results@marathoninvestigation.com.