The idea for a detailed review of Boston finishers began well after the 2015 Boston Marathon. This was after Mike Rossi was very publicly outed for cutting the course in his 2015 Boston Qualifier. The massive thread that followed on letsrun.com was the impetus for my initial blog.

Initially, I would just look at random races looking for obvious cases of cheating and I would post about those cases, and report those runners to races. What was unknown, was how many runners cheat, and use those times times to enter Boston.

I wanted to know how many Mike Rossi’s were there? If the runners I was catching and identifying were not using those times to enter races like Boston, was it really worthwhile to go through the trouble of combing results? 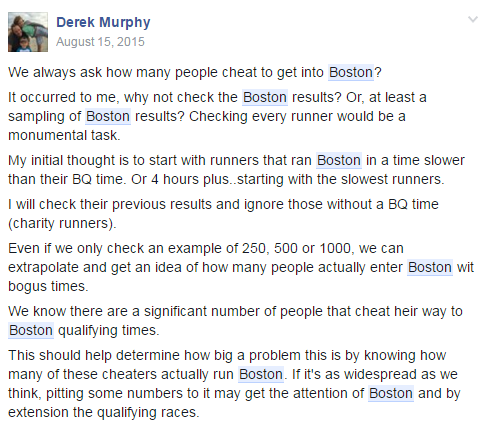 With a lot of help and guidance from a small group of runners that I connected with from the letsrun thread, the basic methodology was developed.

Boston issues bibs based on runners’ qualifying time. Because of this, we were able to estimate within a few seconds, what a runner’s qualifying time was based on the assigned bib number. Plotting Boston finishing time against bib number provides a good visualization of this. The red dots were those that were determined to have cheated either by cutting, using a bib mule, or running with a bib that was not assigned to them.

Essentially, we compared Boston finish time vs. qualifying time. The outliers were the ones that were prioritized for review. If a runner qualified in 2:45:00 and ran a 5 hour Boston Marathon, they were ‘flagged’ for review.

The review process was tedious. There were initially about 4 of us going through the review, eventually it was just me. At the top end of the prioritized list, we found quite a few likely cheaters (still just about 10%). As we got further down, the percentage of cheaters decreased. I owe a lot to Runner’s World. One of the members of the group that helped investigate results made the writer aware of the project, and when they contacted me, it motivated me to keep plugging away with the investigation.

The initial review was meant to just gather data, to get a feel for whether a significant number of runners cheated to get into Boston. Based on time and availability of data, some things weren’t accounted for which are now part of the process in flagging runners.

For any number of reasons, on average, runners run Boston slower than they run their qualifying race:

Instead of looking at the variance based on qualifying time, I now generate a ‘predicted time’.

Last year, on average, runners finished Boston about 11.25% slower than they qualified. Males were 12.4% slower and females were 9.9% slower. By default, I will adjust males and females predicted time based on these variances for The 2018 Boston Marathon.

To account for the qualifying races, I pull data from the races that send the most runners to Boston, as well as the ‘easiest races’ that I’ve previously identified. I look the variances between runners qualifying times and Boston for each of these races specifically, and adjust my predicted times appropriately. This process adequately adjusts the predictions so that runners in these races didn’t disproportionately come up for review.

I Don’t Think You Cheated

Every year, I get emails from runners that either planned to take it easy, or had a bad day. Typically they go into great detail about how they don’t want me to flag them or to call them out for cheating. This is not necessary.

As I wrote earlier, even at the top of the list, only about 10% of runners are determined to have cheated. And this determination is NEVER based solely on their Boston time. The only time the Boston result is ever looked at is to check photos and to make sure that the runner running Boston is the same runner that ran the qualifying race. If everything looks fine with the qualifying race, the runner is cleared. If there are any flags within the qualifying race, I look deeper at a runner’s historical results. Was the qualifying time an outlier? Were there other similar times? If so, were those times also suspicious?

What I look For

I will write more on the runners that had their bibs pulled after applying for The 2018 Boston Marathon, as well as those that still have bibs despite evidence of cheating in their qualifiers.

The goal with nearly everything I write is to try to minimize cheating, and in particular cheating to get into Boston. I will write more about how I am now able to more efficiently monitor races to catch the cheaters and work to have them disqualified prior to registering for Boston.

A look back at 2017. Cheating at Boston, Runners banned for copying bibs, etc.