In May, AZCentral.com published an article on Greg Pafford.

Dr. Pafford has been profiled on this site for his impossible splits over 12 consecutive years at the RnR Arizona Marathon. Since I was unable to get a hold of Dr. Pafford directly, I will respond to comments he made in that article.

As confirmed in the article, the times came directly from the race results pages from every year since 2006. 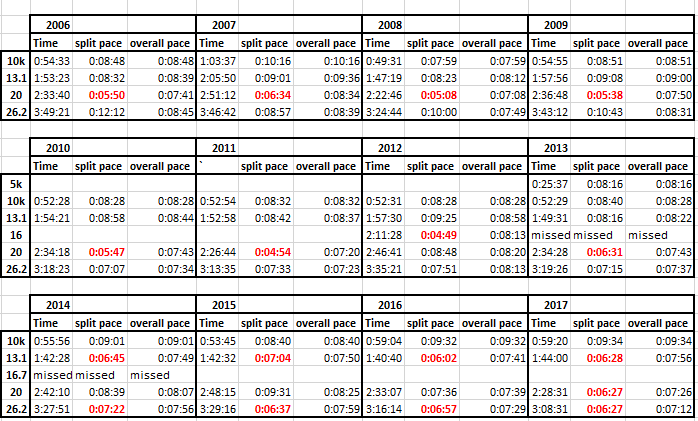 This was confirmed by the reporter. I sent him links to all of the times.

“Ask anybody who knows me: I’ve done more charity work, and I’m a nice guy.”

Being a nice guy or doing charity work does not mean he didn’t cut courses. I’ve seen many times where runners or their supporters feel that they should get a pass because they are running for charity or they are ‘nice guys’.

For the 2017 marathon, he originally had a finish time of 3:08:31. Pafford noted that he briefly mingled with family and “sang a Cheap Trick song.” He suggested that leaving the course may have caused a technology glitch.

This is absurd.  There is zero chance that his leaving the course would have led to him being recorded crossing the finish time before he actually did. Also, he had similar ‘glitches’ in the prior 11 years.

“I’ve never cut the course … I don’t get anything out of this. It’s a stress release for me, and now it’s become stressful.”

There is simply no other explanation for the 12 years of results shown above other than concluding that he cut the course.

He also says that, after the initial Marathon Investigation article, he contacted RnR and told them something wasn’t right, leading to an adjustment of his time to 5:00:00.

In fact, he was disqualified initially, and shortly before the 2018 race, he was inexplicably added back to the results with the 5 hour time.

Pafford was originally registered for the 2018 marathon but dropped down to the half. He finished the half marathon in a time of 2:37:47. He says he was feeling ill.

He also stated that he consulted libel lawyers but decided against filing a lawsuit. I’ve consistently shared only the facts. The data was taken directly from the RnR results pages. I’ve offered my opinion that he cut the course based only on these facts. It is conclusive that the times and splits he was credited with from 2006 through 2017 are not accurate.