These splits, along with a runner’s claim that they passed Ramon twice – near the 6.2m check point and somewhere after the 19.7 check point, leads me to conclude that he cut some of the course prior to the 10k split, and at some point between 12.75 M and the finish.
I am not sure where he would have cut the course after the 12.75 mm. It is obvious that he did not run the full course. I would appeal to anyone that ran this race to offer insight as to the best way it might have been accomplished on this course. He missed the same mile marker 4 straight years. That is not a coincidence. And the splits that I laid out, further show that it was impossible that this time is legitimate.

Additional Notable Races
2014 San Jose Rock ‘N Roll San Jose Marathon – Half 1:23:49 missed 10 km split. I have also linked all of the photo pages below. This one in particular sticks with me. While not definitive proof of cheating–he does not seem to be in near the same physical condition of those around him. That’s him on the left. 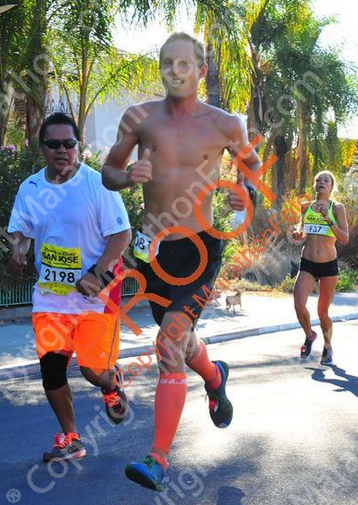