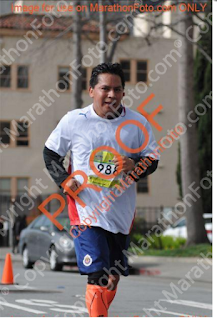 Please take the time to read the original article on Ramon.

In summary, he missed the same mat from 2012 through 2015 at the Oakland Running festival, and the split times calculated where he missed the mat are impossible. He also missed a split at the 2014 San Jose 1/2 marathon.

You would think all of the information, this would have been an obvious DQ. The last response I received from the race director is:

“At this point there is not much I can do because it is 6 months after the event. Remind us next year and we will pay closer attention to his times.”

This was after I gave him examples of where other marathons DQ’d runners from as long as 3 years prior, and re-sent their list of  BQs to the BAA to make sure that they did not use their inaccurate times to enter Boston. They could have easily banned him from entering the race in the future. 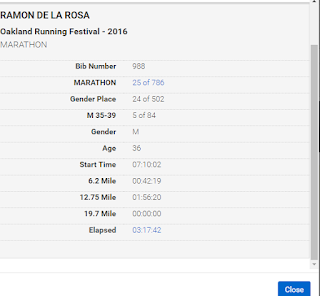 Ramon has another 2016 Marathon time that seems more in line with what one would expect him to run. He finished the 2016 Napa Valley marathon in 4:39:21.  The photos are linked below. He definitely looks more fatigued in those photos than the ones where he seemingly cut the course.

Shortly after I posted the initial article, he logged a time of  1:33:33 in the Santa Rosa half marathon. He missed the only split. Below are a couple of the photos of him on the course. Very similar to the photo posted of his 2014 San Jose RNR 1/2 marathon in the initial article.

Below are all of the relevant links. I will again reach out to the Race Director of Oakland, and will also send a note to the Santa Rosa Race Director.

As interesting and as obvious a case this is, the bigger story and the goal is to get some action and accountability on the part of the races to take action and spend a little bit of time to clean up the results, disqualify course cutters, and to ban repeat offenders.