Almost as soon as the Boston Marathon was over, I started receiving tips from runners about suspected bib swappers, and runners that saw someone on the course that didn’t seem capable of earning their bib #.

Today, I started to receive a handful of messages regarding bib forgeries. The BAA takes bib forgeries very seriously. Bib forgers make copies, or digitally alter copies of legitimate bibs to con themselves into the starting corral.
These forgeries are often detected when the forger’s photo is linked to the legitimate runner’s photo page.
One case in particular caught my attention.
A runner from the Dana-Farber Marathon Challenge team emailed me this morning telling me about the counterfeiter. I’ve since received additional emails regarding the same runner.
The bib that was forged was a charity bib. The real runner raised over $5000 for the Dana-Farber Marathon Challenge to earn the right to run with this bib. From their website…
The Dana-Farber Marathon Challenge (DFMC), in collaboration with the Boston Athletic Association, offers the exciting opportunity to run the Boston Marathon® while raising critical funds to benefit the Claudia Adams Barr Program in Innovative Basic Cancer Research at Dana-Farber Cancer Institute. Since taking its first steps in 1990, DFMC has raised more than $74 million, resulting in improved survival rates and quality of life for cancer patients everywhere. The largest charity group in the Boston Marathon, the 2016 DFMC team aims to raise $5.4 million in pursuit of the ultimate finish line: a world without cancer. 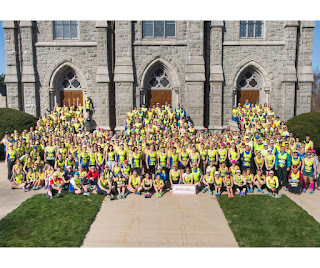 This runner got to experience the thrill of running the Boston marathon. But, he did so without paying the price of earning a spot – or raising money to support a cause. Volunteers most assuredly gave him support, spectators cheered him on. But,he wears a medal that is tainted, and a bib that belonged to one of the proud runners in the photo above. Thankfully, his name will never show in the results. Hopefully, if he is ever identified, he will be made to pay for that bib.