As part of the Boston Project that was outlined in Runner’s World, we flagged runners to review that finished in a significantly slower time than their Boston bib # would predict. 4 Runners were initially  flagged that qualified at the 2014 Monte St. Michel Marathon.

As a point to point course, it would seem that course cutting would be impossible.
The first one we flagged was Olivier Guilhen, A search of the race’s results page shows this:
There is also clickable finish line video that shows the runners wearing bibs 2853 and 427 crossing the finish line at 3:09:50. But Guilhen (bib #7433) is missing. He also has no photos on the course. At this point I felt that the runner with identical splits carried the bib during the race.
The next runner we flagged was Xavier Deltin. with a clock time of 3:04:55. If you look at the video, you can see that no one crosses the line at 3:04:55.
One interesting note is that Xavier had a goal of completing the marathon majors. He posts publicly on his results for nearly every race, but makes no mention of Mt St Michel and the race of his life.
The below was grabbed from his public Facebook photos (translated from French) He comments twice on the cost for Boston. 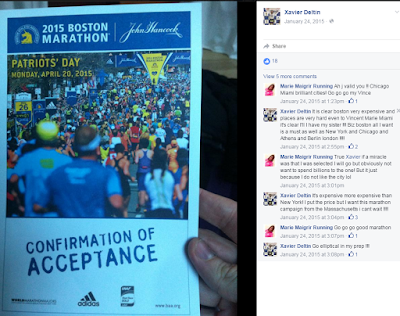 The next runner that was flagged is Philippe Fuhr. Below is a picture of the finish video. Philippe should have finished between runners 262 and 2030.
The difference between Philippe and the other runners is that it appears he actually ran the race.
His actual time shown in the video missed a BQ by 9 minutes. His official time was 5 minutes faster than the cutoff.
Here is a shot of Philippe finishing with the clock showing 4:02:48 just after he passes. His bib # is 487. 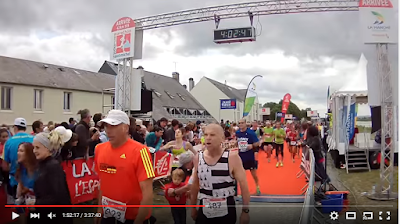 The last runner that was flagged was Philippe Derouin. His clock time is 3:52:02.
As with Guilhen, his splits mirror a runner.  At this point, we do not believe the other runner is involved.

Derouin is not seen at the finish. He was registered with bib # 3115.
It seems highly likely the results for these runners were added after the race.
Lastly, I decided to cross check the Boston entry list against the Mt St Michel entry list to see if there were any other runners that qualified for Boston at the race.
It was determined that 8 additional runners ran the 2015 Boston Marathon that had qualifying times at Mt St Michel. Of the 8, 3 more have no photos or no splits.
In summary, there were a total of 12 runners that recorded BQ times at Mt St Michel that went on to run Boston in 2015.  6 of those runners do not appear on the course at all, and a 7th runner appears in the video 14 minutes after his credited time.
It would appear that there was a coordinated effort to obtain Boston Qualifications for this group of runners.
Google “Boston Marathon Travel Agency Europe” and you will come to sites offering services similar to this.
As an official travel partner of the Boston Marathon, BAA (Boston Athletic Association) we are pleased to offer GUARANTEED entries for the Boston Marathon.
How is this possible? Some agencies may legitimately procure charity bibs for runners that have not qualified. But there is the possibility that in some cases the entries may be obtained through other means. After coming across this case, there is another group of suspicious results that needs further investigation. See the below chart that plots finish times vs bib #s for all runners located  a single country. The red stars represent those runners. 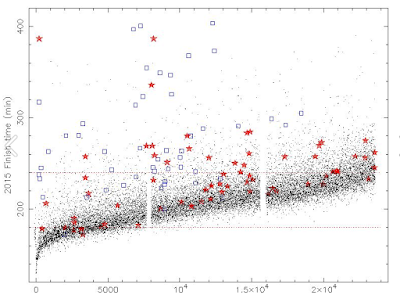 There are a disproportionate amount in the outlier area. I am hopeful to soon have information on the qualifying races they used to be able investigate more. As of now, I have been unable to find any qualifier for the outlying results.
I will provide an update if any additional information is available. If any reader has any additional thoughts or information, please email me at derek@marathoninvestigation.com.