There was a runner that was flagged as having a suspicious result during the review of Boston 2015 qualifiers.  The questionable result occurred at the 2014 Green Bay marathon. He missed multiple splits and looking at the course map, it is difficult to figure exactly how this was accomplished. 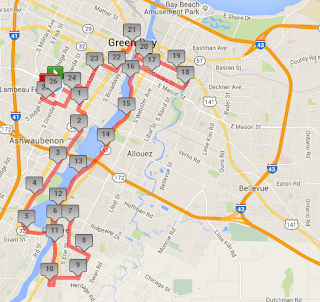 This runner hit splits at 5 miles, 15 miles and has a finish time. He missed  the 10, 13.1 and 20 mile splits. He is the only runner in the results that missed this combination of splits.

The missed splits, and negative calculated splits made it very likely that this runner cut the course. But, I still left him off the list of confirmed cheaters. I was having trouble figuring out how he would have hit the 15 mile split and miss the 1/2 marathon split. and how he hit the 15 mile split and not the 20.  If you believe he did indeed cut this course, you would have to assume that he had transportation between the checkpoints – otherwise he would have hit more mats – even if he cut the course in the most obvious spots.
There were additional questions regarding two Columbus marathon results.
In 2012, he finished Columbus in 3:51:38. The split between 13.1 and 20m jumped out at 7:08 min/mi. 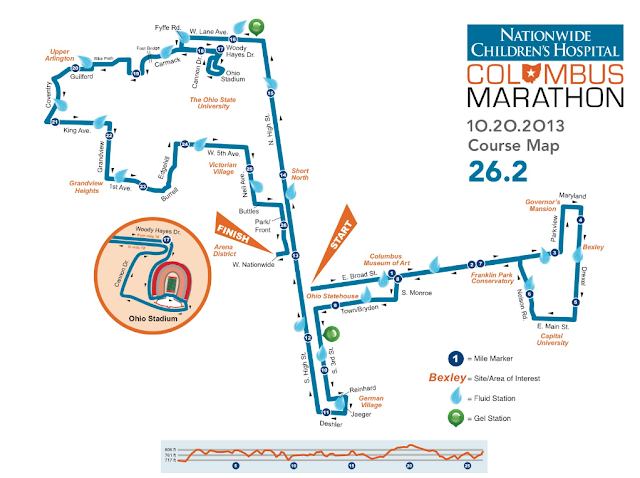 2 things here, the added split is at Ohio Stadium. this section is easily cut – it is an out and back loop. Secondly, looking at the elevation profile (and from personal experience), the section where this runner has the abnormally fast split, is net uphill. From about mile 17 and 20, it is steadily uphill. There is no way that anyone runs this section as their fastest split.
This brings us to the 2016 RNR Nashville Marathon. I received a tip regarding this runner and immediately recognized the name.

He missed the 1/2 mat. These results show that he completed the 10 miles from mile 10 to mile 20 in 46:38.  That calculates to 4:40 min/mile.
This runner has been reported to Nashville Marathon Officials. I also plan to make Green Bay officials aware of this new information. If Green Bay does issue a disqualification, that will open the door for Boston to take action since he used Green Bay as his qualifier.