I wanted to elaborate more on the project that was the topic of the Runner’s World article. You can go to the bottom of this post for links to 3 particular cases that I felt warranted further attention.

A group also was formed on Facebook to discuss racing and to investigate potential cheaters outside of  a public forum. Last August I made the following post to the group: (typos included) 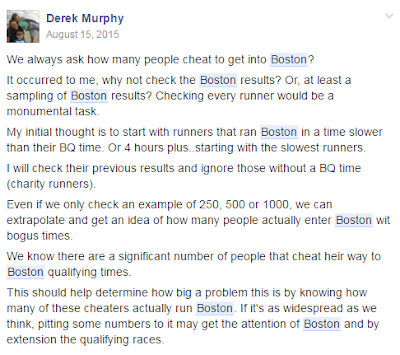 The group got together and was instrumental in coming up with the initial process and criteria of who to review. Boston issues bib #s based on qualifying time, so we were able to accurately estimate BQ time based on the bib # of the runner.  We settled on marking for review everyone that ran Boston  20 minutes slower than their estimated qualifying time. One member came up with the scatter plot of bib #s vs. Boston time. You can see a clear trend, and see clearly where the charity bibs start. We plotted Boston finishing times vs. bib #.

The runners in orange are those that we have flagged as having invalid results with 100% certainty. The runners in blue were either cleared or we just did not have enough evidence to put them in with the invalid results. The green dots are runners that were initially marked for review but have not yet been examined.  The grey dots were not flagged initially. There were a few instances where other information and tips led to a review some of those runners.

At greater than 40% variance between Boston time qualifying time, about 11% of the runners were marked as having invalid results.

At 20% variance between Boston time and qualifying time, the rate of invalid results leveled off at around 2%.

We did review the runners that we felt statistically had the greatest probability of cheating through the methods outlined above. Conservatively, I think the lowest conceivable estimate of those entering Boston using one of the methods of cheating above is roughly 200 runners. My best estimate at this point, is that there were up to 400 entrants that ran Boston without a legitimately obtained bib. For 2016, an additional goal will be to review runners outside of the flagged group to better estimate the overall rate of cheating.
I decided against naming all of the runners publicly, but they all are being reported to BAA and the qualifying marathons as applicable.  I put a priority on reporting those that are registered for 2016 Boston marathon.

With the 2016 marathon less than a week away, the BAA is focused on putting on a safe and successful event. I suspect that anyone not yet removed from the 2016 race will be allowed to run. I will follow up again after the race and give the BAA and qualifying races all the information they need to make decisions on these runners for the future.

We will start the process again for 2016 as soon as the results are released – with a slighly modified criteria that should allow us to be more efficient in our efforts.

Although I am not naming all the runners that were found publicly, there are some cases that I felt were noteworthy to report on – the articles are below.