I’ve previously written about Parvaneh Moayedi, and laid out the irrefutable evidence that she did not complete many of the marathons that she claims.

Some of the key pieces of evidence presented in the articles:

“…observed (1) there was no one validating anything; (2) people started, stopped, went away for a few hours rest, and “finished” whenever they wanted with no one verifying anything; (3) people reported their own time and distances – no one was verifying whether anyone ran the distance they claimed or in the time they claimed.”
“I did see Parvaneh walk or slow jog a lap or two each day, I was surprised to see her in the results as having run marathons, as that seems impossible.  Recognizing these “events” met no one’s standards for certifiable or verifiable “races”, I never again attended any of her events because I view them all as hoaxes.”
“Another time she was in her car because it was cold that day. She walked one or two loops with a friend of hers – she claimed – to check on us. “
“…I only saw her do a lap a day. Because she was always at the finish to record times and between laps to pour soda, Gatorade, etc…There’s just no way she ran marathons those days”
Parvaneh has written a book about her “accomplishment”. 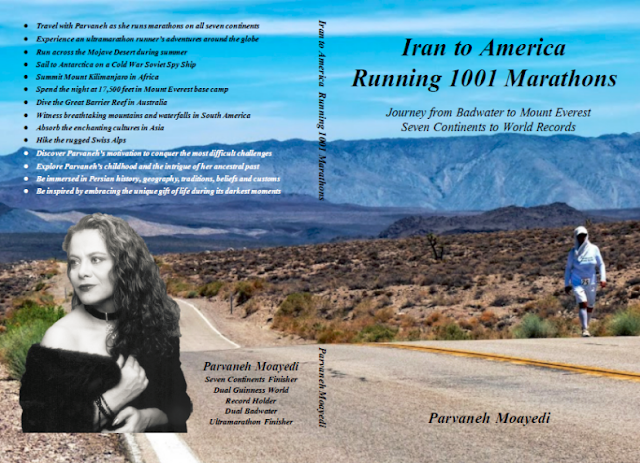 I won’t post the link, but it is available on lulu.
Guinness has been presented with all the evidence, and has refused to take action to this point regarding Parvaneh’s two Guinness records.
Prior to publishing this article, I have emailed their press office for comment. As of publication of this article, they have not responded. I will update this if they do decide to issue a statement.