Bandits exist at every race. Boston used to unofficially welcome them. That was before the 2013 bombing.

I wrote a number of articles after Boston 2016.
There were runners that forged bibs, or used their bib from 2015 to get through security and into a starting corral.

Banditing is not without consequences.

Frankie Ruiz, the race director of The Miami Marathon reports that over 200 bandits were pulled from the course of the marathon on January 22nd. Security was stationed just before the finish line to check for bibs. If a runner was not wearing a bib, they were pulled from the course. If it was determined that they were banditing, they were not allowed to cross the finish line.He posted this video via Facebook Live showing the process.

On the Facebook thread, Frankie says they started this process a few years ago.

With 200 or more bandits, there is a definite cost to the other competitors. Their entry fees go to support these unregistered runners. These runners drink Gatorade, use porta-potties and would take medals and post race food if given the opportunity. If a bandit injures themselves, the medical staff would have to give them attention.

In my opinion, there is no place for bandits. I was surprised by how many Miami caught. With this many unregistered runners, it’s not hard to understand how their presence drives up costs for all the legitimate runners.

I’ve received some comments of other races that have implemented similar procedures. I hope this practice becomes more widespread as a way to keep costs down, and to prevent runners from taking support and receiving medals that they have not paid for,

Edit: Below is the GPS tracking of the bandit catcher Mike Neubauer. He traversed about 13 miles catching the bandits. 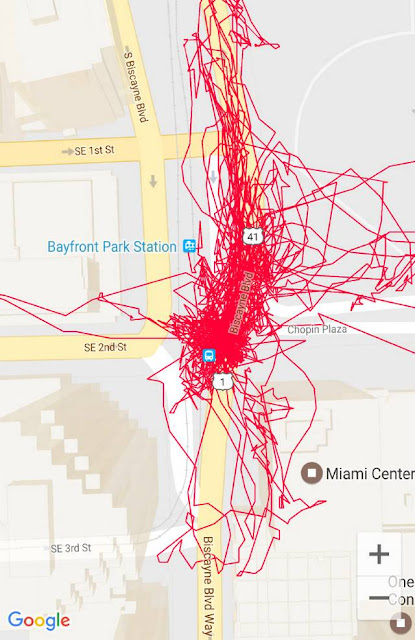