A couple weeks ago I wrote 2 articles about the Disney Marathon. As a result, I’ve received messages regarding a  slightly different type of cheating. Cheating to avoid the balloon ladies.

These runners aren’t cheating to run Boston by claiming illegitimate 3 hour Boston Qualifying times. But I have received emails alleging cheaters that faked their way to 5 hour marathons allegedly to improve corral placement at Disney races.


To those that say I should be focusing on Boston cheaters – I am. I will be writing on that again soon. More runners have been identified with bogus times used to enter 2017. They have been reported and I am awaiting responses from race officials. I am also up to 30 that I’ve identified as having cheated to run Boston ’16 after reviewing about 300 runners so far.

I’ve learned that corral placement is a big deal at Run Disney races. Mainly because of the dreaded balloon ladies. The balloon ladies are the last ones to cross the start line. They maintain a 16 minute/mile pace. If you get passed by them, you risk getting swept from the course.

I asked one group what the reaction it is like when the Balloon Ladies approach.

“I hollered at a bunch of people waiting for porta potties that the balloon ladies were 30 seconds behind me…It was like cockroaches scattering when you turn on the light.”
“They go into a frenzy. It’s like velocoraptors are chasing them. They start pushing and tripping.”

Disney requires Proof of Time for the early corrals. For 1/2 marathons, you need to provide a proof of time for anything under a 2:45:00 estimated finish. For any time slower than that, they accept you at your word. 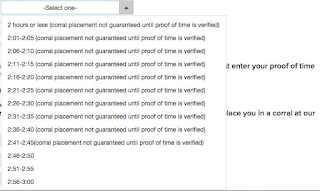 Not coincidentally, there are a large # of runners that submitted an estimated time between 2:46 -2:50:00. 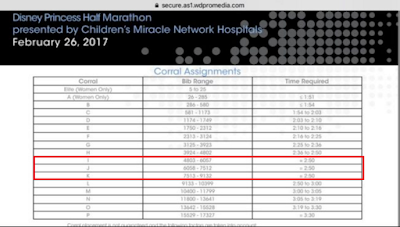 4329 runners submitted a time of 2:50:00. Clearly some of those runners legitimately fell into that window. But looking at the time ranges of the other corrals, it is apparent that a very large portion of these runners just submitted the fastest expected time they could without providing proof.I spent more time than I care to admit following the drama in the Run Disney Run Group on Facebook of the drama that went along with the corral assignments.

One member of the group even requested the names and bib #s of The Balloon Ladies so that ‘her friend’ could use live tracking to know where she was relative to them.

Using Bib Mules
I can’t say for certain what this runner’s motivation was for using a bib mule to run the Disney Half marathon in 2016. But from reports that I have received, it seems that the methods of cheating mirror what I find when looking for Boston Marathon cheaters.

Cutting Courses
I received a rare email this week. I received a message from someone accusing a 5:30:00 marathoner of cheating. It appears that the accused runner did indeed cut the course of a 2016 marathon and used that as Proof of Time for a Disney race. Curious, I looked back some more. He also is missing splits from Chicago in 2014 where he had a time of under 5 hours. (He only hit the 1/2 marathon split). Runners like this typically fly under the radar.
Generally no one cares about back of the packers cutting courses. But it seems that there is a benefit to doing so.
I am not going to typically spend much time finding and reporting these cases (Not that I don’t care–but I only have so much time to devote–and my focus always will be mainly on Boston Qualifiers). But, by all means if anyone reading this article knows of a runner cheating for any reason in order to get a better corral, or avoid the balloon ladies, contact the race directly.

To support the site, and my efforts to keep race results clean, and hold participants and race officials accountable, please consider a small contribution.