Whenever I write about running coaches, bloggers, or running clubs, the interest is high. 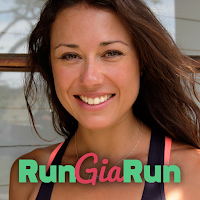 Gia qualified legitimately for Boston 2015. However she was pregnant at the time of the race, and could not run in Boston that year. She gave her bib to the friend. Her friend is a fast runner – and ran a time in that race that qualified Gia for Boston.

Gia used her friend’s time as her qualifier to register for the Boston Marathon in 2016. At least one of her followers knew that Gia did not run any marathon during the qualifying window for Boston ’16. When bib #s were assigned, she knew Gia’s was not obtained through a charity.

At this point the tipster reported her suspicions regarding Gia to the Boston Athletic Association (B.A.A), The B.A.A. made the decision to permanently ban Gia from running in all future B.A.A events – banning her from the Boston Marathon for life.

Gia posted about being banned on her blog. She posted that she was banned for giving her bib to a friend. this was only half true. The real reason for the lifetime ban was that she used her friend’s time to enter Boston ’16. I wrote a quick article explaining this, and it struck a cord with her followers and the running community.

A couple days after I wrote my article, Gia wrote another apology, admitting to her mistakes, and fully coming clean. I shared her apology in a new article – and people generally moved on.

I initially took a hard stance on the Gia Alvarez situation. Looking back on it a year later, I have softened a bit.

She has not posted on her blog since her apology. I think she could still be in a position where she can have a positive voice in the community. She would be in a unique position to advocate for a change in the BAA’s deferral policy.

I hope she goes back to posting at some point. the public, in general is forgiving to those that deserve forgiveness. I feel that Gia deserves some forgiveness at this point. Her mistakes showed some poor judgement and maybe a bit of naivety. She justified her actions internally feeling that she DID run a qualifying time and in her mind she deserved a spot in Boston.

Her circumstances don’t excuse her decisions, but I think she deserves a chance at redemption. I even would go so far to say, that if she were to run a qualifying time, or raise enough money for charity, she deserves another chance to run in The Boston Marathon. 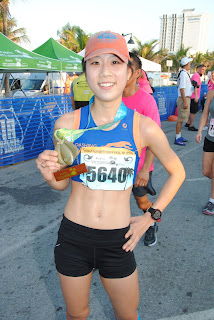 By all accounts, Jane is a very strong runner. Her marathon debut in New York 2016 was impressive. She is qualified to run Boston 2018.

Jane made a series of very bad decisions. From cutting the course, denying it initially, accepting the 2nd place award, covering her tracks, and not fully owning up to it.

She posted an admission and an apology to Instagram, but since deleted her account. Like Gia’s initial apology, this admission wasn’t 100% truthful. Even after the apology was posted, she wasn’t honest with me regarding her post race behavior.

I’ve reached out to her, and my offer stands to post any statement she wants to make.

Before I posted the article on Jane, I shared the story of ‘Linda’ with her, hoping it would motivate her to open up and come clean. the difference between her and Linda was that there were plenty of people already aware of Jane’s actions. However, Linda’s story is an example of how being honest can be cleansing, and how being caught can actually be a relief.

I hope Jane can admit and apologize to those that matter to her in her life, and turn this around and treat it like a fresh start. I hope Jane can learn from ‘Linda’ and Gia that redemption is possible. 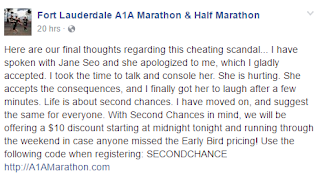 As futile as the attempt may seem -if you look at the article I wrote about Jane, I never actually mentioned her by name.

Through the Instagram posts and photos, I did not exactly protect her anonymity. She did already post that she cut the course to her 30,000 Instagram followers.

But if you enter her name into a search engine, that article does not appear in the results.

Nowhere in the article did I mention her education, or her employment (outside of the fact that her trip to Ft. Lauderdale was sponsored). However, when picked up by the mainstream press, that information was put out there.


Huffington Post writer’s Garmin outs her cheating at half marathon

By the way, her last article for Huffington was in October of 2015.

I left information regarding her education and her past at Huffington Post out of my article. I do always try to focus on only what is directly relevant to the cheating and any direct benefit a runner receives from the cheating.

In the cases where I’ve found doctors or others in positions of trust cheating, I have stated their professions – but not their employers. Still, I will always receive criticism from both sides when I post.

The very first comment I received on the article was from someone that said I needed to put her name in the title so it would appear in Google. There are comments that I should take the article down – that I am shaming her. I’ve been consistent with my guidelines and the criteria to make a post. I do not make a post as some sort of punishment.
As such, I cannot generally back away just because something may have gotten bigger than appropriate. In this case the media felt this was a worthy news story, and ran with it.

I was a guest on Real Runners of Atlanta podcast. (RROA). Please click the link and give it a listen.
We talk about a variety of topics related to race cheating and my site. Most of this is light, but they do ask some very serious questions that relate to my articles and my site. I’m sure you will find it interesting.

To support the blog, and my efforts to keep race results clean, please consider a small contribution. These donations go towards purchasing race photos, compensating the volunteers that work to pull data, and general expenses associated with the site.