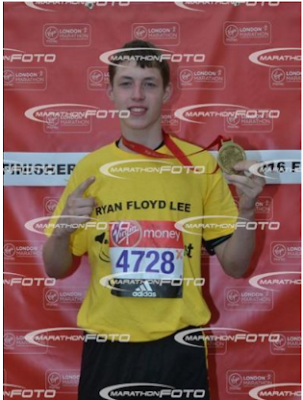 Be sure to read this update as well.Photo Evidence Proves Timing Issue in London Marathon Disqualification of Ryan Lee

Ryan Floyd Lee Ran London as his first ever marathon. His official time was 3:58:32. He has since been disqualified, and his results have been removed from the official London marathon results. According to an article on This Local London, he was disqualified for missing the 5k split. His mother is leading an effort to find evidence that would vindicate him. I saw this article, and put up a post asking for additional evidence. If he indeed was disqualified for mising a single split, without knowing any other information, it would seem that the disqualification was excessive.
Thanks to comments and emails from my readers, we are able to clarify some of the information, as well as raise a few more questions. we still do not have Ryan’s actual splits, which would really help bring everything together. 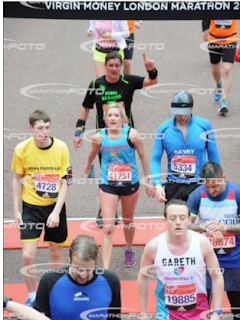 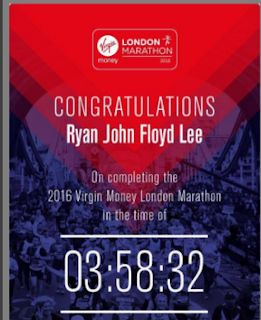 Ryan was in the blue start, you can tell by his bib. Looking at the finish line photos, there are two other runners from the blue wave crossing at the same time. Runner 534 had a 6:44 chip/start differential. Runner 19885 had a 2:39 differential.
Using this photo, and the other runner’s finish times – we can tell that Ryan finished at 2:15 PM. Or a 4:15:00 gun time.  His net time was 3:58:32 – a 16 1/2 minute differential between his chip time and the gun time.
I did search through other bib #s, and found other runners with large chip differentials. Runner # 4730 for example, had a 15 1/2 minute differential. It would appear that Ryan started at the very back of the Blue Start.

UPDATE: CONFIRMED WITH MOM THAT IT IS RYAN IN VIDEO. SAYS JACKET REMOVED AT BEND BEFORE CUTTY SARK. THIS VIDEO WAS TAKEN BEFORE THAT POINT. I BELIEVE HE REMOVED IT AT AROUND 10 KM AT THE LATEST.
In the comments on the initial article on ThisLocalLondon.com, a commentor pointed to a link in the broadcast fee where they believed they spotted Ryan. 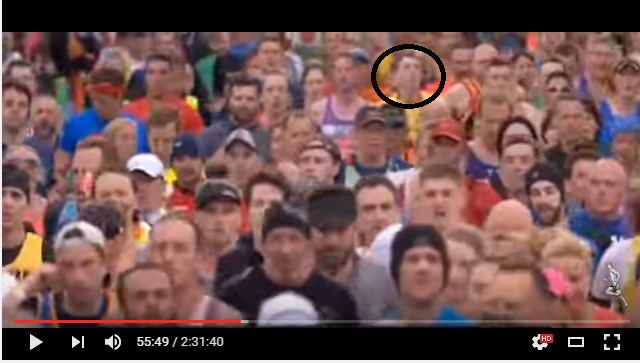 https://www.youtube.com/watch?v=livETSfr3zE&feature=youtu.be&t=3338
The runner with bib # 30004 is spotted in the video, (Blue shirt bottom right corner- cant see bib in the above shot, but you can catch it in the video, and I verified it by looking up his bib on marathonfoto).
There is a 3:17 difference between the time on the youtube video and the elite start time. This point in the video was filmed at 10:52 am. Bib 30004 hit the 10k mat at 10:50:23 AM. This puts this video just past the 10k mat. Therefore, even if the runner in the video is Ryan, it does not prove that he was on the course before the 10k split.

If Runner in the Video is Ryan

He would have hit the 10k mat at approximately the same time as runner 30004 – at approximately 10:50 am.  Accounting for Ryan’s 16:30 gun/chip differential, he would have crossed the 10k at an approximate 33:30 split.  This would be a 5:24 min/mi pace.
This is where having the actual splits would be conclusive. It could either rule out that the runner in the video is Ryan, or it would confirm that Ryan crossed the 10k mat in the time the video indicates, and would confirm the decision to disqualify.

Articles regarding Natasha Argent’s disqualification state that she missed timing checkpoints 13-23. This would indicate that there are many unpublished checkpoints. Much of the doubt regarding the initial disqualification was the statement that he was disqualified for missing a single mat at 5k. It would appear likely that there were other mats prior to the 10k mat that he registered. If he did cut off a significant portion of the first 10k, he would have missed these additional checkpoints.

If he did cut the course, it is my belief that he would have crossed the start line (at the back of the pack), and cut through the park to the point just before the 10k mats. If it is Ryan pictured in the video, I think the evidence against him would be irrefutable. His timing splits would back up this conclusion.
I would expect that the disqualification was a result of additional missed unpublished mats or an implausible 10k split along with the missed timing point(s), and not just simply a single missed mat with nothing additional.

I’ve messaged the mom, and she confirms that it is Ryan in that video. There is one possible way that this isn’t the damning evidence that I think it is – if the footage of the group of runners was an edit, and taken earlier. However she says he removed his jacket after the 10km point – near Cutty Sark. I don’t believe this to be the case, but it is a possibility if he removed the jacket earlier than he recalls.
Also, another photo surfaced. 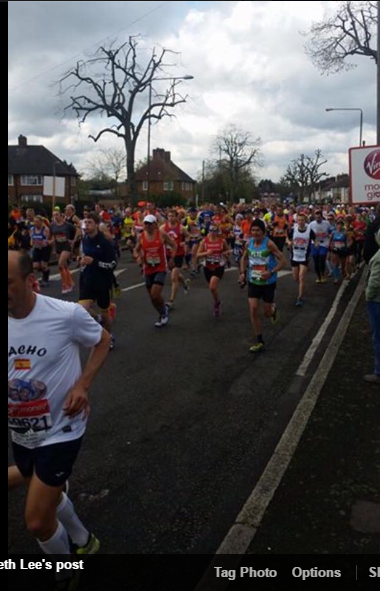 This is said to have been taken at Charlton Park Lane. That would put him somewhere between miles 1 and 3,  If this is verified, it would disprove the theory that he crossed at the start and immediately cut to the North end just before the 10km point.
See below link for analysis of the photo evidence.
Photo Evidence Proves Timing Issue in London Marathon Disqualification of Ryan Lee