Kilian Jornet is a renowned adventurer. He was selected as a National Geographic Adventurer of The Year twice, and has won The Hardrock 100 in 2014, 2015 and 2017.  In addition to ultra running and mountaineering, Jornet is a professional Sky Runner.

On his ‘Summits of my Life’ website, Kilian Jornet’s goal of setting speed records is detailed.

Jornet seeks to ” establish new speed marks in some of the most emblematic summits of the planet.”

There has been controversy surrounding Jornet’s Summits of My Life project related to his attempts at Mt Everest.

This controversy is not new. Questions regarding Jornet’s May 2017 ascents were first publicly questioned as early as December 2017 when Dan Howitt released his investigation regarding Jornet’s claims. Athletics Illustrated interviewed Howitt in March of this year.

If you would like to access the full report, it can be found at the link below:

Furthermore, Jornet claims to have completed a 2nd ascent of Everest from Advanced Base Camp on May 27th 2017 with a total ascent time of 17 hours.

In a new 56 page report, independent investigator Andy Tavin, provides very detailed and convincing evidence regarding the 4 key claims Jornet makes regarding his Everest ascents. Tavin was given access to Jornet’s original GoPro footage and GPS data. His findings center on the data he is able to extract from this evidence.

I will briefly summarize Tavin’s findings. I encourage everyone to read the full report. The information below is largely pulled from Tavin’s report.

Additionally, it was noted in Howitt’s and Tavin’s reports that while Jornet provides ascent times down to the minute for his other ascents, only approximate times are provided for his Everest ascents. After learning of Howitt’s report after it was posted on letsrun.com, Tavin reached out to Jornet’s represntatives after they had failed to provide promised evidence of Kilian’s ascents.

For Jornet’s claimed 2nd ascent, Tavin was unable to confirm that Jornet successfully reached the summit. He did conclude that if Jornet did summit that it took him significantly longer than claimed.

Tavin’s report was reviewed and his work “received no major objections from The Himilayan Database reviewers”.

Jornet is fully sponsored, and as mentioned above, a documentary, Path To Everest was released detailing Jornet’s journey.

Again, I recommend reading through the entire report.

This isn’t the only time someone’s Everest claim was challenged. In 2016 an Indian Couple photoshopped themselves at The Summit of Everest, resulting in a 10 year ban. They were also fired from their jobs as Police Constables. 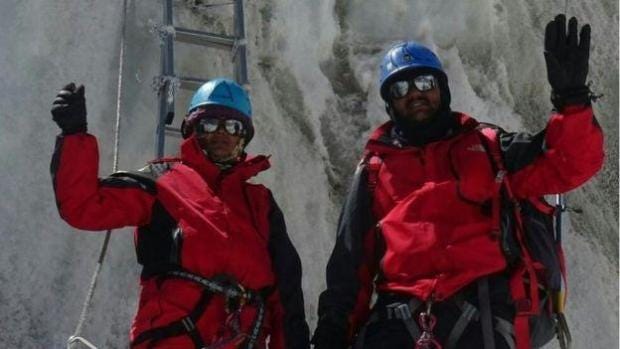 In the 2012 Speedgoat 50k, Jornet was found to have repeatedly cut switchbacks. It is standard in Europe and to allow this. Cutting switchbacks is not allowed in nearly all US Ultras and was not allowed at The Speedgoat 50k. He was stripped of the course record and the associated prize money. He was given a time penalty, and the official course record went to the 2nd place finisher along with the prize money for breaking the record. Jornet did not fight the ruling. Jornet was allowed to keep the 1st place finish.