In Stephen King’s ‘The Long Walk’, 100 participants must maintain a 15 minute per mile pace for as long as they can. If, at any point they fall below a 15 minute per mile pace, they are warned. If a walker falls below the required pace after 3 warnings, they  earn their ticket, and they are out of the race – they are killed. This continues until only one remains. The lone survivor receives anything they wish for.

I read this book as motivation for Big’s Backyard Ultra. Big’s is similar in that you must run just over 4 miles per hour, every hour until no one remains. There is only one finisher. The last one standing.

The race started at 6:40 AM on Gary Cantrell’s (AKA Lazarus Lake) farm. Big is their dog, a Pit bull that they rescued, and my new friend. Big worked in the timing tent throughout the race – his only demand was that you pet him. I ‘earned my ticket’ after missing the cutoff just two hours in, so I had lots of time to spend with Big, Lazarus, the timers (Good Mike and Bad Mike) and lots of the crew and runners as the days went on.

70 started the day. For awhile it looked like there would be only 69. Johan Steene, coming from Sweden had a travel nightmare. His plane was diverted, by the time he arrived on The East Coast, there were no planes to fly him to Tennessee. He had to drive all night, and arrived at the race 15 minutes before the race. Johan has been a powerhouse  in the event. In 2014, he was in the final 2, and only gave up after 204 miles, because he had to catch his flight home. In 2017, he was among the last 3 standing, finishing with 154 miles. The consensus in the backyard was that the extra stress caused by the travel would limit Johan at some point.

Runners dropped with regularity in the early hours (including yours truly). The first 12 hours are run on trail. I underestimated the difficulty of running on the trail. Also, it had rained the entire night before. The trail was slick in parts. For me, that meant an early exit. I didn’t have the ability or training to be able to make up for the early conditions.

After 12 hours on the trail, runners move to the road. 53 runners completed the 12 trail laps and to the road for an out and back run, until the following morning when the remaining runners would return to the trail. Many runners fight hard to make it to the easier road. But at the same time, the road hours are dark–and temperatures dropped.

To Add to the cruelty, the ‘JEERLEADERS’ made their first appearances.

C-O-L-D HAUL SOME A** OR YOU WILL FREEZE

22 runners did not survive the Dark or the cold.

When the road loops end, and the runners return to the trail, there is typically a flurry of drops. 4 runners finished the road on night two but were unable to complete another trail loop. 4 more dropped after the next lap. The drops came steadily through the day. 11 runners made it through 36 hours, and back to the road. 6 more dropped overnight, leaving the final 5 to start day 3.

At the start of hour 51, you can see the camaraderie (and maybe a little gamesmanship) when Guillaume came in with little time to spare, and lined up in Courtney’s spot.

It was at this moment that it became clear that these runners aren’t really running against each other at this point. Unlike races where a runner can leave others behind, these runners lined up with each other lap after lap, hour after hour. They are friends, and the bond deepened over the last 2+ days.

In what seemed like an eternity, but was only about 20 minutes later, Guillaume came in.

2 laps later, Greg dropped. He missed the cutoff. Greg was generally the last runner into camp. We didn’t know if that was his plan, or if he was wearing down. Turns out, he was wearing down. It was during that lap that I left camp, and was left to follow the action online like everyone else.

Gavin was next after 65 hours. He dropped after they returned to the road.In Laz’s own words.

out in the darkness
on a lonely road
a drama played itself out, unseen.

he had run on and on,
as attrition tore through the deepest filed of endurance talent ever assembled,
until, finally, gavin was one of three runners still answering the bell.

but when the survivors lined up to start the 66th hour
gavin woody was in trouble.
his back was bowed
under the weight of the countless miles.
his feet were sacks of broken bones and bruised meat
and his leg muscles turned to blocks of unresponsive wood.

i dont know where gavin found the strength to answer the bell.
and, as i watched his bowed and broken figure shamble out into the darkness,
i wondered if i should stop him,

but, if he had the courage to answer the bell
i felt like he deserved to finish on his own terms.

it was not that long before gavin came staggering back into race headquarters.
his buddies rushed to his side,
and half carried him back to his chair,
where he slumped,
racked with sobs.

he might not have succeeded,
but gavin had met every challenge head on,
and, faced with insurmountable obstacles,
he had refused to back down.

gavin won’t get any records
or fame.
all he will get is a DNF

That left two, Courtney and Johan.

Again, I can do no better justice than to post Laz’s and Johan’s words. This post was made by Laz after he got some much needed rest.

i watched the clock accrete its numbers,
and at 3 minutes till blew the whistle three times.

there was not a sign of life from the tents,
as i thought back to 3 days earlier…

when three whistles had drawn a throng of runners to crowd the corral.
at two minutes till i sounded the whistle again.

up until a few hours earlier,
courtney had come out to stand alone in the corral at two whistles.
it was a blatant display of indifference,
as the rest of the dwindling field had come to the corral later and later,
scraping for every second of rest they could get out of their too brief interloopal periods.
there is a little bit of poker in the backyard race,
and runners took every opportunity to show strength.

courtney had finally succumbed to the need for that extra minute of rest.

one whistle sounded.
still i stood alone in a nearly empty field
in front of an empty corral.
the darkened tents betrayed no signs of what was (or was not) going on inside.

and there was no winner!

at 30 seconds the two gladiators emerged from their tents
and walked to the starting line
standing silently awaiting the bell.

as i counted down the last 10 seconds i saw courtney turn to johan,
and say something.
they exchanged a few words
blown away in the wind,
and then they embraced….

and i knew instantly what had just happened.

only one runner remained in big’s backyard.

i watched johan’s slender figure disappear into the darkness,
as courtney walked over to her husband (boyfriend?)
and they stood a long time in a sad embrace;
then she walked over to me
a deep sorrow washed over me as we hugged.
what could i say to this magnificent warrior?
she had fought a good fight.
she had run 279 miles in less than 3 days
and broken every man in the field,
save one.
she had absorbed unbelievable punishment without flinching
endured intolerable pain without a whimper.
she had run to the very brink of victory.
but walked away with nothing.

truly. what could anyone say?

she went into her tent,
and the backyard seemed totally empty.

it was a long wait for johan to complete his victory.
he would later tell me it was the hardest lap of the race.
“once i knew i had won, i could feel all the pain.”

the joy of victory was overshadowed
by the loss of his last rival and companion.

it is always this way when the backyard ends.
you have suffered so much together.
shared the pain and the effort
gone through so much
for so long.
in the end losing them is like losing a piece of yourself.

there is a balancing act in writing about a race like this.
while the real story is the warriors who make the drama happen,
i don’t want to put words in their mouths…

they should be allowed to tell their own story.
with johan’s permission, here is his recap of the finish
(an amazing job of capturing his feelings in a second language):

“If there had been a predestined finish line at Big’s Backyard my money would have been on Courtney to win, she would beat me at any such race and distance. But at the Backyard you draw your own lines. As long we are at least two remaining there is a feeling of purpose, that this painful game has a meaning. That illusion disappears in a blink when only one remains. The actual winning needs to be the sole focus if that is what you’re after. That focus was feeding me and let me put all other things aside. At the moment when Courtney congratulated me and remained in the coral as I jogged away alone into the Tennessee night I didn’t feel joy. I felt empty and without purpose. You can not carry the illusion by yourself. It takes at least two to play. Thanks Courtney Dauwalter for taking us this far. We are good at playing this game.”

It was an honor to be able to witness these runners throughout the weekend. They all fought incredibly hard, and fed off each other, for support and motivation. Johan, Courtney, and Gavin all broke the previous backyard record. They needed each other to do so. Had the others quit earlier, Johan would not have pushed so far, overcoming so much adversity to just show up.

There was no prize. Everyone got a tshirt and a dog tag. These runners did it to push their limits. They did so admirably. It is by watching these incredible efforts that motivate me to try to catch those that cheat. Kelly Agnew was disqualified from after winning over a dozen races. He stole those wins from people that put it all on the line. When I write about those lacking the integrity to compete honestly, it is so those that are deserving get their due.

Congratulations to everyone that competed, especially the final few. Now, I am off to the trail in hopes that I get a second chance to put some miles in Big’s Backyard. I am grateful for the new friends I made, and hope to see you all again soon. 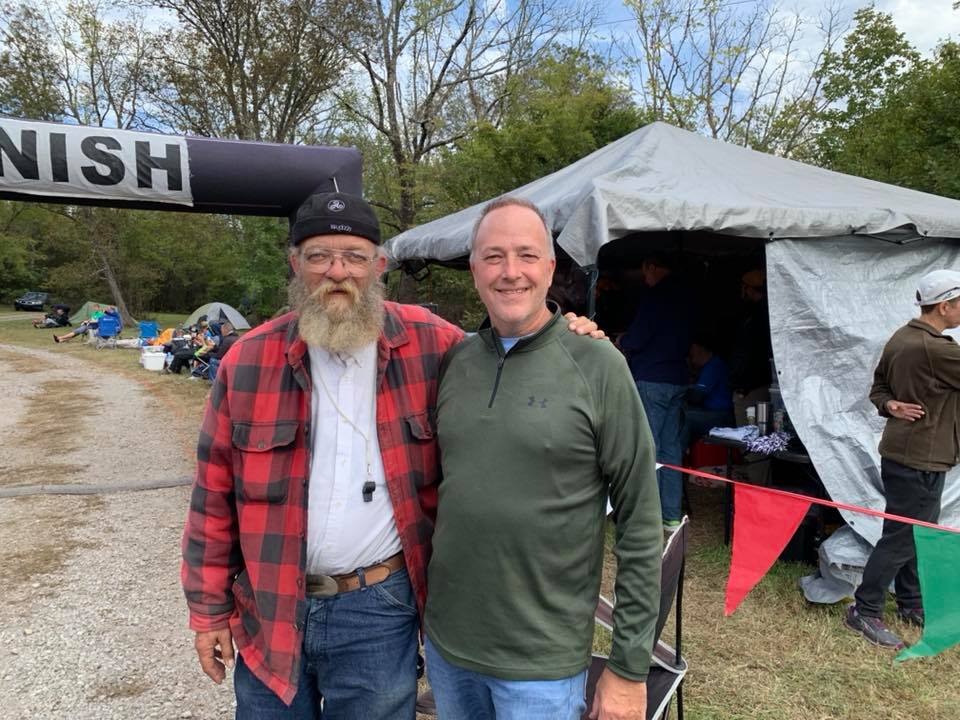 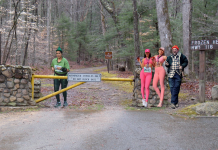 Bib Stealing and Course Cutting at The Barkley Marathons? 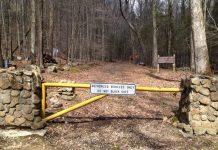 In Contrast To ‘Everyone Gets a Medal’, The Barkley Marathons Stand Out.